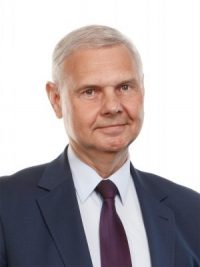 Professor Waldemar Tarczyński
His Magnificence Rector of the University of Szczecin
rektor@usz.edu.pl

Professor Waldemar Tarczyński is a graduate of the Szczecin University of Technology, Faculty of Transport Engineering and Economics. He graduated in 1983 with honours on the basis of his master’s thesis entitled “Ekonometryczna ocean efektów postępu na przykładzie DOKP Szczecin” (Econometric evaluation of progress effects as seen in the case of DOKP (Regional Directorate of State Railways) Szczecin). That same year his thesis won an award from the President of Statistics Poland in a competition for the best master’s thesis. He defended his doctorate in 1989 at the University of Szczecin with a dissertation “Ekonometryczne metody badania wykorzystania zdolności produkcyjnych w transporcie samochodowym” (Econometric methods for studying the use of production capacity in road transport).
Only 6 years later, in 1995, he obtained his postdoctoral degree (doktor habilitowany) on the basis of his monograph “Metody ilościowe w analizie otoczenia przesiębiorstwa” (Quantitative methods in the analysis of a company’s environment). He received the academic title of professor of economic sciences in 1999 being just 39 years old, which makes him one of the youngest full professors appointed by the President of Poland in the history of awarding of this title. His monograph submitted for his promotion to the rank of professor was entitled “Fundamentalny portfel papierów wartościowych” (Fundamental Portfolio).
Prof. Waldemar Tarczyński has authored over 200 publications, including 27 books. He has supervised 24 doctorates, reviewed 67 doctoral theses, 28 postdoctoral theses and 19 applications for the conferment of the title of professor. Privately, he is happily married with children and grandchildren. He is a multiple winner of the first and second degree Individual Ministerial Award for organisational achievements. In 2011 he was awarded the Knight’s Cross of the Order of Polonia Restituta (third highest state decoration in Poland, second highest civilian award).
His interests include books, film and music as well as sports—Nordic walking, swimming and cycling. 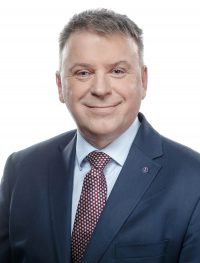 Professor Andrzej Skrendo received his doctoral degree of on the basis of his thesis Tadeusz Różewicz i granice literatury. Poetyka i etyka transgresji (Tadeusz Różewicz and the limits of literature. Poetics and ethics of transgression). The thesis won an Individual Award of the Minister of National Education and Sport. He earned his postdoctoral degree in 2008 at the Institute of Literary Research of the Polish Academy of Sciences on the basis of the book Poezja modernizmu. Interpretacje (The poetry of modernism. Interpretations). In 2016, he was awarded the title of professor of humanities.
He has held the following positions: Head of the Media and Communication Department at the Institute of Polish Studies, Cultural Studies and Journalism, Deputy-Dean for Academic Affairs at the Faculty of Philology, and Director of the Institute of Literature and New Media.
He worked as a radio and television journalist for many years. In 2006-2007 he co-created and hosted “Regał”, a programme about books broadcast by TVP1. He was the head of the Literary Editorial Section of Channel 2 of the Polish Radio in Warsaw.
He worked as a journalist of the Polish Radio Szczecin for many years, later to become its editor-in-chief and president of the board. An expert in the National Programme for the Development of Humanities and a member of the Committee on Literary Studies at the Polish Academy of Sciences. 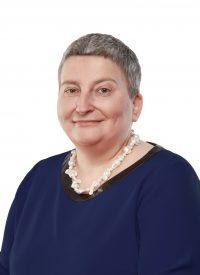 Assoc. Professor Kinga Flaga-Gieruszyńska,
Prof. of the University of Szczecin
Vice-Rector for Organisation

Associated Professor Kinga Flaga-Gieruszyńska, Prof. of the University of Szczecin earned her master’s degree in law at the University of Szczecin in 1997. Only 4 years later, on 4 October 2001, she was awarded a doctoral degree in law on the basis of her thesis entitled “Cywilnoprocesowy charakter postępowania odrębnego w sprawach gospodarczych” (Civil law and procedural nature of separate proceedings in commercial matters). Her scientific achievements and the work “Zastój procesu cywilnego” (Civil procedure standstill) earned her the post-doctoral degree of doktor habilitiowany in 2012. Today, professor Flaga-Gieruszyńska is working on another monograph as a step to initiate the procedure to be conferred the title of full professor.
In her scientific and research work, professor Kinga Flaga-Gieruszyńska mainly deals with issues related to medical law, protection of rights of patients and citizens, bankruptcy and restructuring proceedings, as well as alternative dispute resolution. Her scholarly achievements include three monographs, numerous chapters in edited volumes written in Polish and other languages, as well as dozens of articles published in national and international journals. She is currently Head of the Research Group of Civil Procedural Law and Computerization of Justice at the Faculty of Law and Administration.
Her academic and organisational achievements, including in the field of cooperation with the community, became a strong rationale for her taking the position of Vice-Rector for Organisation in the 2020-2024 term. 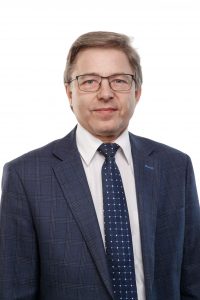 Assoc. Prof. Jacek Batóg,
Prof. of the University of Szczecin
Vice-Rector for Finance

Associated Professor Jacek Batóg, Prof. of the University of Szczecin has been affiliated with the University of Szczecin since 1989. His scholarly interests mainly focus on theoretical aspects and application of econometrics, statistics and multivariate analysis, with particular emphasis on economic development and growth, assessment of economic and financial standing of enterprises, investment decision support and classification of social and economic infrastructure.
His scientific research centres on broadly defined quantitative methods and its results have been presented in over 150 papers published in national and international journals and monographs. He acted as a co-investigator in 8 national and 2 international research grants.
His scholarly achievements earned him a scholarship from the Foundation for Polish Science and 4 awards of the Rector of the University of Szczecin.
Currently, professor Batóg is a member of the Statistics and Econometrics Committee of the Polish Academy of Sciences, the Section for Classification and Data Analysis of the Polish Statistical Association (PTS) and the International Federation of Classification Societies. A bridge enthusiast, he has been teaching bridge at the University of Szczecin since 2008. 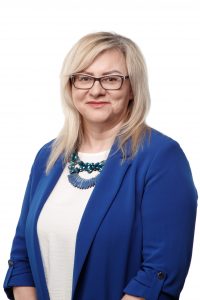 Assoc. Prof. Renata Podgórzańska,
Prof. of the University of Szczecin
Vice-Rector for Education

Political scientist by education and passion – after the first day of classes she knew that the decision to study political science was a spot-on choice. Passionate about European cinema and Scandinavian crime stories.
Associated professor Renata Podgórzańska, professor of the University of Szczecin completed her studies in political science at the University of Szczecin in 1994. She obtained her doctoral degree on 22 May 2003 on the basis of her thesis entitled “Polityka zagraniczna Polski w pracach Sejmowej Komisji Spraw Zagranicznych w latach 1989-2001” (Poland’s foreign policy in the works of the Sejm Foreign Affairs Committee in 1989-2001). She obtained her post-doctoral degree (doktor habilitowany) in 2014 on the basis of her thesis entitled “Polityka zagraniczna Polski wobec obszaru pojugosłowiańskiego” (Poland’s foreign policy towards the post-Yugoslavian area).
Her academic interests include Polish foreign policy, especially post-1989, Poland’s role and significance in the international arena, national security and armed conflicts, the process of stabilisation and strengthening of security in the Balkans, socio-political transformation and Europeanisation of the Western Balkans, and migration in the modern world.
In 2007 she was awarded a bronze medal of the Minister of National Defence “Za zasługi dla obronności kraju” (Medal of Merit for National Defence) and a medal of the Szczecin Scientific Society “Amicus Scientiae et Veritatis” for her research on Poland’s post-1989 foreign policy, awarded in the Professor Czesław Mojsiewicz National Competition for the best book on political science. 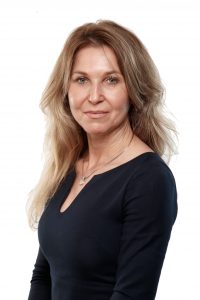 Associated Professor Katarzyna Kotarska, prof. of the University of Szczecin – holder of the post-doctoral degree (doktor habilitowany) in physical culture sciences, associate professor at the University of Szczecin. She authored and co-authored over 100 scientific works, including 5 monographs and a script on medical sciences, health sciences and physical culture sciences.
Her scholarly interests include determinants of physical activity in various social groups, which has evolved from the activity of young children (nursery and pre-school children), to people of different ages, to chronically ill people. Her research projects consistently emphasise physical activity as an integral element of a healthy lifestyle and as a factor supporting preventive healthcare.
Katarzyna Kotarska has also developed a scientific interest in prospective assessment of physical activity, quality of life and fitness of liver transplant patients. Her research results have drawn the attention of the medical community to the role, value and necessity of physical activity among chronically ill patients, demonstrating its great significance in post-transplant recovery. They also prove that further research is necessary.
She reviews doctoral dissertations and post-doctoral scholarly achievements. An affiliate and chair of numerous faculty and senate committees, she has been a member of the Faculty Council and the Senate for many years. She has served as Deputy-Dean for Student Affairs in 2012-2020, Head of Department, Acting Director of the Institute of Physical Culture Sciences in 2019-2020, and currently serves as Vice-Rector for Student Affairs for the 2020-2024 term.
She received awards of His Magnificence Rector of the University of Szczecin for special scientific achievements in 2005, 2010, 2014 and 2016. She has received numerous honours from the University of Szczecin Students Union – Faculty Mentor Award given in 2013, 2015, 2016 and 2017. In 2018 she received a special distinction awarded by the Student Forum of Universities in Poland – the University Ambassador Award. 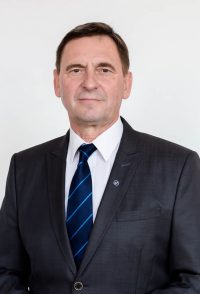 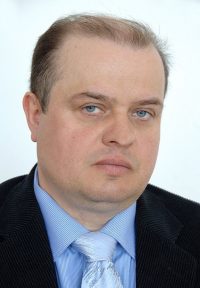